A showcase for the oldest and longest epic in the world. A resource for the better understanding of all aspects ofSanatana Dharma, Vedanta and Yoga.A place for West to meet and embrace East beyond cliché, presumption and prejudice.

I found this picture around the same time that I first read the Mahabharata, in the 70's, in South India: 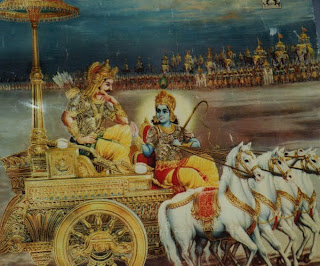 It was on an old calender belonging to a friend of mine, a wonderful older Indian woman called Ramani. She was a fantastic cook, and because I wasn't doing much in the way of cooking myself she often invited me over for a delicious South Indian meal. Always I looked at this calender hanging on her wall, always I told her how much I loved it. One day, she gave it to me.

I brought it back to the West, cut away the picture from the calender and hung in on my wall. Over the years it began to disintegrate, and so I pasted it onto cardboard backing and framed it under glass, and hung it above my desk. While writing Sons of Gods I would glance at it now and again; it inspired me.

When I began to think seriously of publishing Sons of Gods I knew from the start that this picture HAD to be the cover. Nothing else would do. The problem was that I would need the artist's permission; and how to get that?

There was a signature in the bottom left hand corner, quite clear: Mu Ramalingkum. But that was just a name, the name of some artist who lived and worked among India's millions back before the 70's; probably an old man now, perhaps dead. How on earth would I find him? It seemed like looking for a needle in a haystack. I didn't know where to begin.

I began where one does, nowadays: on Google. And in fact I did find the name on a couple of websites. Most of all I found out that a Professor Daniel Smith of Syracuse University had put together an archive of Indian poster and calender art in the 70's. Mu's name was among the artists in his collection. The picture I wanted, however, did not seem to be in the collection. I did follow a couple of other leads, which led nowhere, but always I came back to the Daniel Smith Collection. I wrote the museum and they told me they would investigate, but that it might take a couple of weeks.

In the meantime, I developed a Plan B. I discovered that India has a law covering Orphan Works, that is, works of art for whom the copyright holder is unknown or cannot be found. This was wonderful; most Western countries so not have such a law.  I knew if all else failed and I could not locate Mu or his heirs, I still had that option. But India's legal mills grind slowly; if it came to Plan B it might hold up the project for months. And it might be costly; I might have to place ads in all the major newspapers  of India to show that I had searched for Mu in vain.

Back to the Daniel Smith collection. Eventually I wrote one of the historians at the archive whose email address was on the website: Susan Wadley. She wrote me back, and forwarded my mail to Professor Smith.

A few days later Professor Smith's reply landed in my mailbox. And it was pure gold.

Professor Smith had interviewed Mu Ramalingkum in 1977. He had records of the address and telephone number (the interview itself is in the archives). Better yet, his home town was in Kovilpatti, Tamil Nadu, just a few hours away from the place I had first found the calender; and best of all, my son happened to be there, in Tamil Nadu, right then! I called the number right away, but the telephone number was out of service. Not surprising, after 30 years.

I wrote my son and sent him some money, and instructions: he was to take a car and a translator and drive down to Kovilpatti. Introduce himself, tell him about me and my project and how much I wanted the picture for the cover; ask him to sign the permission, and give him 10,000 rupees (about £100) which I thought was a fair price, and is actually quite a small fortune for many Indians.

A few days of nail-biting passed while my son found the time to make the visit.

Last Monday he went. I called him on his mobile in the early afternoon; he was already on his way back home.

Yes! He had the signature. Mu himself, sadly, was dead, but his son lived at the address and had a small jewellery shop there. He had signed gladly; and he wouldn't take any money. Everything had gone smoothly.

I now had exclusive permission to use the artwork! I am still over the moon.

The best thing about this is that Mu's beautiful picture is now public. In all the years since I fist saw Ramani's calender I have never
ever seen this particular image again in India or elsewhere. It was, practically, lost to the world; and considering how quickly my own calender was disintegrating, there is very likely no other copy "out there". There must be an original somewhere, and one day I will visit Mu's son and ask after it. In the meanwhile, though, the picture comes up on the very first page is you google Mahabharata images. That's very gratifying.

I'm very aware, of course, that this picture does not necessarily  comply with  Western criteria for "Art." I realise that some people might call it kitchy. I understand that it might seem out of touch with the modern world, and unsuitable for a book cover. But it had to be.
The Mahabharata is an Indian folk tale. This is Indian folk art, of the better kind. It's art that is found all over India. It represents the spirit of Sons of Gods. It's not about liking or disliking.
It's perfect. 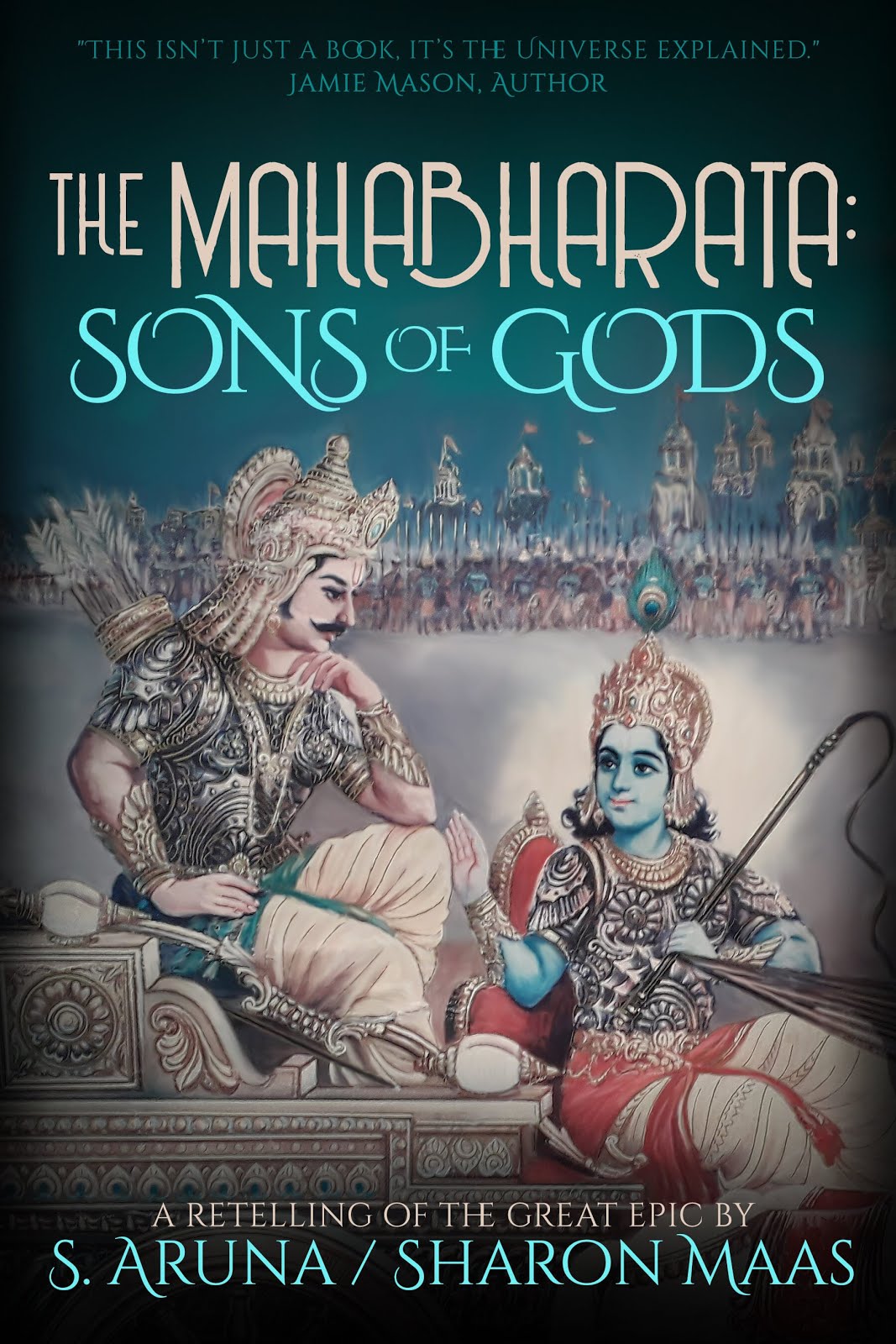 Sons of Gods is available as e-book from Amazon. You can buy it, or borrow it through Kindle Unlimited or Kindle's Lending Library for Prime subscribers.
Don't have an e-reader? You can still read it on your smartphone or computer by downloading the free Kindle app.
It is also available in Print from most retailers.
Questions?
Contact: arunasonsofgods at gmail.com

Not Just for Hindus

"The highest literature transcends regionalism, and through it, when we are properly attuned, we realise the essential oneness of the human family.

"The Mahabharata is of this class. It belongs to the world and not only to India. To the people of India, indeed, this epic has been an unfailing and perennial source of spiritual strength. Learnt at the mother’s knee with reverence and love, it has inspired great men to heroic deeds as well as enabled the humble to face their trials with fortitude and faith."

From: Preface to the Second Edition of The Mahabharata, by C. Rajagopalachari; Madras 1952